The Tacoma-Pierce County area has enjoyed a rich tradition of baseball from the sandlot beginnings in 1874, to the first professional game at the “Eleventh Street Ball Grounds” in 1890, to the “100 Day Wonder” known as Cheney Stadium, which was opened in the spring of 1960. While Tacoma has laid claim to six Pacific Coast League championships since the 1904-1905 season, it was the players who competed in the City, Valley, Sunset, Community, Timber, Commercial, Industrial, and Shipbuilders leagues that formed the backbone of the sport. Among notables that have dotted local rosters or competed in the major leagues are Ron Cey, “Indian” Bob Johnson, Mike Blowers, Jon Lester, Rick Austin, Steve Whitaker, and Doug Sisk, as well as Baseball Hall of Famers Walter Johnson, Joe McGinnity, Juan Marichal, Gaylord Perry, and Willie McCovey. 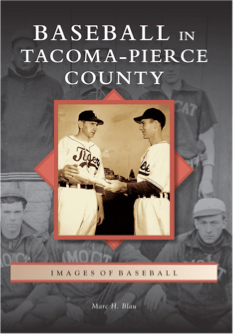