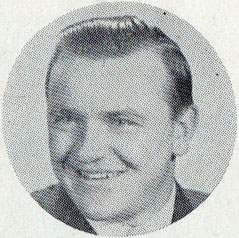 Known as one of the most descriptive, animated and all-around best hockey broadcasters around, Bob Field served as the play-by-play voice for all seven years of the Tacoma Rockets franchise, with his enthusiastic "THEY SCORE!" call having been said to test the ability of any working radio. Born in 1924, Field split his youth between Canada and Philadelphia. After being drafted into the Navy , he concluded his service while stationed in Tacoma. From there he worked as a salesman for his radio sponsor, Columbia Breweries of Tacoma, and began hi s play-by-play career with the Rockets. Field and Clay Huntington formed the broadcasting duo for the Tacoma hockey team until the franchise folded in 1953. For a few years after that they partnered for Channel 13 television calling the Seattle hockey games before Field wrapped up his broadcasting career in Spokane. He retired in the early 1960s and moved to Westport in 1971, where he operated the Fabulous Fish & Pet World. He passed away in 1992.